The South Bass trail is named after William Wallace Bass, an entrepreneurial soul, who moved out west for his health in 1883. He prospected and mined in the canyon, and established tourist camps, stage roads and trails on the rim and below.  The trail that bears his name connects both rims and is one of the more remote, established/maintained trails within the Park. 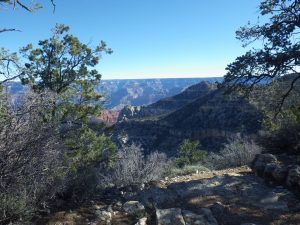 The trail starts out relatively easy, by Grand Canyon standards.  A few switchbacks through the Kaibab Limestone layer and you move down through the Toroweep and Coconino layers via several sets of recently constructed stone steps.  At the Coconino, look for remnants of Bass’s wire fence.  This area is where you’ll also be able to view prehistoric granaries up, and to the right of the trail. 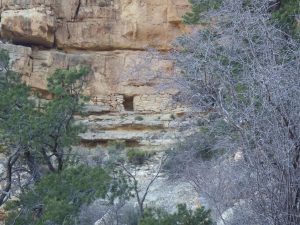 From there, some steep, rocky switchbacks drop you onto the Esplanade – a gently rolling, pinyon/juniper covered plateau atop the Supai formation.  This plateau contains numerous agave roasters scattered throughout the area, especially near the outer edges of the platform.  After a short hike across the Esplanade, you will arrive at a large cairn, poised above a short ledge.  This marks the junction of the S. Bass and Royal Arch trails.  If you continue straight, descending to below the ledge, you will clearly see the South Bass continuing on towards the break in the Supai that will take you down to the Red Wall.  Heading left, following the smaller cairns, will take you west along the Royal Arch trail.  When we arrived at the junction, it was time for a lunch break.  By then, the wind had picked up and the temperatures were still quite brisk.  With the goal of finding a sunny spot, out of the wind, we did not drop down, below the cairn, instead inadvertently heading left on the Royal Arch trail.  My map for this portion of the trip had been cut off when I copied it, and I wasn’t sure where the junction was.  The detour was serendipitous.  Several very big agave roasters are located along this trail.

I’ve documented numerous roasters in the southern Great Basin and Colorado plateau and these were, by far, the largest roasters I’ve ever seen!  After realizing my mistake, and checking our location with a compass (my friend remembered that she had a small scale, overview map of the trail system) we backtracked to the large cairn, stepped down onto the main trail and hiked the short distance to the edge of the Supai.  A steep, rocky trail then takes you down to a break in the Red Wall formation, in the bottom of Bass Canyon, down to the Tonto junction.

Our little side trip out the Royal Arch trail probably added six miles to our day.  Heading down to the Tonto junction my main concern was whether or not we’d have time (daylight) to drop our packs, hike down to the water pools/tanks on the South Bass trail, hike back up to the junction and get to Serpentine before dark.  Based on feedback/information I had received on the water quality at Serpentine, I had decided we would tank up at the S. Bass pool before heading on.  The water in Serpentine can be highly mineralized, if the flows are low, and can cause cramping/diarrhea.  However, a few minutes before arriving at the Tonto junction, we met a group coming out of Serpentine.  They informed me that she was running at several gallons per minute, and they had filtered water there the day before with no ill effects.  I decided to skip the long process of unpacking, hiking down and filtering.  We’d just throw the dice and drink the water at Serpentine.  The gamble paid off.  We arrived at Serpentine with enough daylight left to find a campsite, get set up and filter water.  The creek was flowing beautifully, just like the guy said it was.  No ill effects.  After a meal of freeze dried beef stew with a packet of Tobasco sauce thrown in for good measure, I crawled into my tent and fell asleep to the song of a peeper, trilling from the edge of the creek. I woke up the next morning with absolutely no screaming. 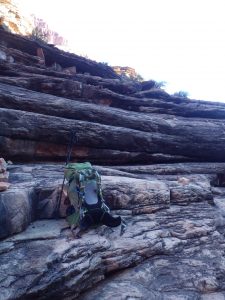 The destination for Day 2 was Turquoise Canyon.  A short, 10.6-mile jaunt from Serpentine.   Heading out Serpentine Creek canyon, we began hiking east, along the Tonto.  I love the Tonto Platform.  The views you get are truly vast.  You are, for the most part, contouring around the large plateau that lies atop the Tapeats sandstone formation, at around 3100′ in elevation.  As you hike along, you’ll get occasional glimpses of the River, around 1000′ below you.  The Tonto Platform is relatively green, for the desert, home to agaves, bur sage, black brush, Chamisa, ephedra, paintbrush and assorted cacti.  Also, make note of the numerous fossil trackways along the trail.  Millions of years ago, when the area was covered by shallow seas, small creatures passed through leaving their footprints.  You’re not the first to pass by here…

One of the Tonto’s more endearing characteristics is that it isn’t always there.  Sometimes you’ll be hiking along and realize you aren’t on a trail, and there have been no cairns for several minutes.  It isn’t a maintained trail, it’s more of a “route.”  It should follow the line that makes the most sense, but not always.  If you keep one rule in mind, you really can’t get “lost”: if heading up-river, if the South Rim is to your right and the river is to your left, you’re going the right way.  Just meander a bit and you’ll find the trail again.  The Tonto is more or less flat to gently rolling, with the exception of the side canyons. 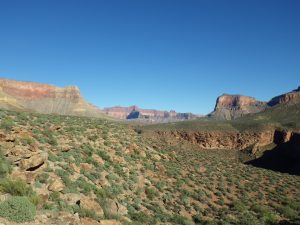 These you “head out,” hiking up one side to where the trail crosses the drainage at the most reasonable place, then hiking back out the other side.  Some are just quick little detours off of the main plateau, some go on and on, seemingly, forever.  The trail will contour along the side, descend steeply/loosely into the drainage, then climb steeply and loosely back up. 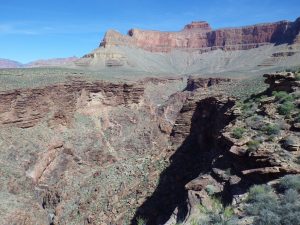 Your best strategy is to repeat over and over again, “I’ll get there when I get there.” Taking the map out and looking at how much further it is to the head of the side canyon will only make it seem longer – think sitting in the back seat of the car, asking your parents “How much further?!?”

Roughly halfway between Serpentine and Turquoise, we headed into Ruby Canyon.  It was running nicely and seemed like a good place for lunch.  It’s a great place to take off the boots and dry your socks, soak your feet in the creek and relax a bit.  I need to find a rough trail/multi-day worthy backpacking boot that doesn’t have a waterproof “breathable” liner.  They aren’t breathable, not even slightly.  I’ve tried trail runners and light hikers and for this place, I need a little more boot.  We’ll leave it at that.  After cooling off, we headed back out the other side of Ruby – not too bad a crossing. 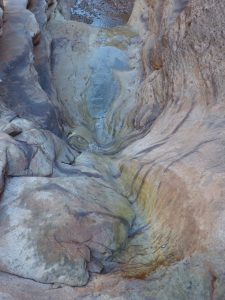 The hike up and out, and back onto the main Tonto is a bit loose and steep, but short.  Very soon after striking the Tonto, I found a perfect chert projectile point, lying in the center of the trail.  It would have fallen/eroded down from upslope.  I was pleased/surprised that it hadn’t been stepped on.  I took a couple photos of it and set it just below the trail, under a Chamisa plant.  Take only pictures… 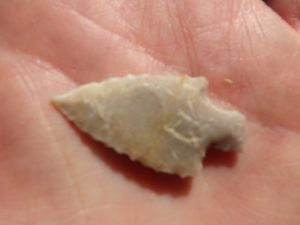 We dropped into Turquoise Canyon around 5 pm.  There are a couple of seeping springs above the trail crossing, with a few pools.  The water was clear and cold.  Dinner was a nice Pasta Bolognese, and some herbed olives washed down with a nice rehydration/electrolyte beverage.  In bed by dark (7:00) and a few more peepers.  The next morning was clear and calm – perfect conditions for hiking. 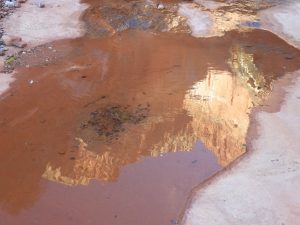