Turquoise to Slate!  The day included approximately 9.3 miles of Tonto Platform hiking, at it’s best, with a couple large side canyons to head-out – Sapphire and Agate. They both had steep descents and exits, but nothing too epic.  For the most part, the trail was well established and marked with cairns.  I only had to meander a few times, after losing it in the sage brush.  Before starting out, I decided to switch out my copper Superfeet insoles for the pink Superfeet I had tossed into my pack as an afterthought.  I had started to develop a pinched/blistered spot on the side of my heel and really wanted to nip that problem in the bud.  It worked!  The extra weight of the spare insoles paid off.  From that point on, I didn’t have a SINGLE blister or hotspot issue, for the rest of the trip. A good thing too, as I managed to lose my little roll of ducktape someplace, along the way.  Hopefully, someone really needing a roll of tape stopped in the same shady spot, where I’d lost it.

Heading into Sapphire, the trail passes below a fairly large, prehistoric rock shelter complete with a nearby roaster.  Contemporary visitors have utilized it as a campsite.  Usually, you don’t want to camp in/on an archaeological site.  You can cause quite a bit of disturbance to the site.  Oddly enough, GCNP actually has at least one designated campsite, smack in the middle of an agave roaster, in the Salt Creek Camp.  I guess once a campsite has been “established” by backpackers, the park assume it’s better to keep using it, rather than create new impacts?  Anyway, the rock shelter was a very nice, example of the site type: a well-extended drip line, sheltered from sun and wind, overlooked a large water source, extensive charcoal/fire-cracked stone deposits and lots of stone-tool waste flakes.  I snapped some photos and then we made the descent into Sapphire Canyon.

A short, steep/loose hike down brings you into the drainage.  Sapphire is a very nice creek, and was flowing big! The creek bottom is formed of bedrock in a lot of the drainage, and there are several small pools and pour-offs.  It made for a very nice brunch spot.  After resting a bit, and letting the feet dry, it was up and out Sapphire and back onto the Tonto, to head out and around to the mouth of Agate.  On the way, we came across a bighorn ram’s skull lying alongside the trail.  That’s the first one of those I’ve ever found.  No sign of any of his skeleton.  It looked like it had been there for a season, maybe two.

Heading out Agate was a very warm, dry experience.  We found no water there (I didn’t expect to) and the trail heading out of that drainage is, as you might guess, loose and steep.  We stopped for lunch in a shady spot, just west of Scylla Butte and then began rounding the point to head into Slate Canyon, our destination for the night.  You get some nice views of the river as you turn the corner here and, as always, spectacular up/down canyon panoramas.  Dropping into Slate didn’t take too much effort and we were in camp by 4:15.

That left plenty of time for relaxing, snacks, doing some laundry, a leisurely dinner.  Slate is another beautiful side canyon complete with waterfalls, ferns, very friendly hummingbirds and a huge agave roaster, just uphill from the streambed.  After dining on a meal of Mountain House Biscuits and Gravy (my favorite), and a lovely concert by the local Peeper choir (they seemed to increase in volume at each campsite), I hit my sleeping bag.  I’d need to rest up for the next leg – Hermit Creek! 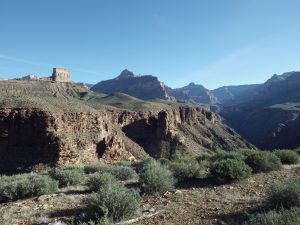 Slate to Hermit Creek is, according to the NPS, approximately 10.8 miles.  There are several small drainages to head-out and numerous low hills and rises that you ascend and descend.  Again, it was a matter of just accepting that you’d “Get there when you get there” and not obsess over “How much further?”  The scenery along this stretch is pretty spectacular (it is anywhere in the canyon), and at one point you get to look down onto the notorious Crystal Rapid!

Huh, it doesn’t look like much from 1100′ up.  The hike around from Slate was all pretty easy and really felt like it went by quickly, until we began our hike around and into Boucher Creek.  Again, loose and steep descent, and hot – bake-oven hot.  I was truly grateful to find a charging, bubbling creek with shady streamside ledges for sitting, and leafy trees.  A perfect spot for lunch.  The Boucher Trail will take you down to the river, from the rim.  It is on my list of routes to do, in winter.  It was already too hot for me to imagine taking that project on.  The hike out of Boucher to the eastbound Tonto was very steep, loose and directly exposed to all of the Sun’s loving attention.  The route out of the creek is marked by cairns, and you hike up to the split in the trail – left Tonto, right Boucher – which is marked by a large cairn.

From there the trail contours around Whites Butte to head-out Travertine Canyon.  Travertine is dry and fairly easy to get through.  Another hour or so, and you drop into Hermit Creek.  The creek was flowing so high, I actually had to think about where I was going to cross it without getting soaked.  We got to the campground around 4:30, had our pick of campsites and had time to wash up and rinse socks.  There is a large, steel-pipe pack rack there, to hang your packs on.  It helps keep the critters out.  The NPS has also replaced the old, open to the universe, portable tank toilet with a nice, new, clean, solar composting toilet.  You don’t have to stare at the campers staying in the Group Site when you do your morning business anymore!

I’ve heard people talk trash about Hermit, probably because it can be busy, but I love it.  Lots of shade, a nice loud stream that will drown out most of the people noise, and more peepers.  It also makes a nice base to take a stopover day, and hike down to the river, or over to Boucher.  We only had one night here.  After a dinner of Mountain House chicken and noodles (very tasty) and a nice electrolyte beverage, we called it a night.  It would be an earlier start tomorrow – my friend was hiking out the Hermit Trail to return to Colorado, and wanted as much shade as possible for the climb.  My day would be easy – only 3.5 miles.  My next stop would be Monument Creek and the famous “Three Seater” toilet!