After saying “Happy Trails” to my friend, I turned left at the Hermit Trail/Tonto Trail junction and began the short, easy hike around to Monument Creek.  This is another of my favorite Tonto trail sections.  Great scenery and the first half is shaded if you get up and leave Hermit early enough in the day.  We had a relatively timely start, later than I’d wanted, but not too bad.  The night before, I had been awakened around midnight by a small noise and looked up to see a mouse, spread-eagled above my face.  He had crawled up the mesh wall of my tent and was peering down at me.  I said “Hello” and gave him a gentle thump.  After falling back to sleep, I managed to sleep through the alarm I’d set on my watch, and didn’t wake up until the sun was starting to light up the sides of Hermit Canyon – so much for the early start.

From the junction, it’s a straightforward contour around to Monument.  You have one low ridge to ascend about half way that affords you a great up/down canyon view.  After heading out a small, unnamed side drainage you see “The Monument.”

It’s a 130′, free-standing spire of Tapeats sandstone that gives the location its name.  A few short, steep switchbacks bring you into the Monument Creek drainage, past the large group site under the trailside ledges and then past the famous Three-Seater toilet.  It’s one of the most scenic, and sociable toilets in the world.  Open to the air, with three seats divided by low privacy walls, it looks up on the Red Wall and is perfectly visible (binoculars help) from The Abyss Overlook, up on the South Rim.

I walked into the campground early enough that I had my choice of sites.  I chose the last, small site overlooking the creek.  It was sheltered in the trees, mostly invisible from the main trail and had its own access trail to the water.

After a quick snack, I hung my food up in my Ratsack and headed downstream to the bedrock pour-offs and pools.  The creek was running high and cold.  After a quick dunking of your head, you can sprawl on the sun-warmed granite and relax.  Monument is another of my favorite places in the canyon, although the last time I was here I was with a group of friends, so was feeling a bit nostalgic/lonely.  There is great exploring to be done downstream, lots of birds, lots of shade.

After I’d eaten dinner, and put away the kitchen, I heard a noise down in the creekbed – a short gurgling sound, and the crunching of gravel.  I looked over and my trail tired, overfed brain shouted “Oh my god! A condor!”  I quickly came to my senses and registered a large wild turkey, picking his way down the creek.  Which, at the time made about as much sense as the condor theory.  I snapped a couple photos of him.  They look alot like the classic “Bigfoot” photos you see online.  He did not stand still for me, and the light was terrible but you can make him out.  Apparently, it’s not too unusual.  Turkeys do come down below the rim, and sometimes they’ll even winter over at Phantom Ranch.  The ranger I ran into the next day was really excited to hear about him.  Weird.

Despite the two largish groups that came in later in the day, it was pretty quiet in Monument.  The creek drowns out most human-caused noises and at dusk, the ever-increasing peeper population began their chorus.  Peepers, if I didn’t mention earlier, are the amorous little frogs that inhabit the Grand Canyon, wherever there is enough water to lay their eggs.  They sing a variety of tunes – telephones ringing, goats bleating, doors creaking, small tubas, etc., occasionally a large belching call will emanate from the shadows.  When they all join in, it makes for quite a concert.

I managed to wake up early the next morning.  I had a 10.7-mile trek around to Indian Garden ahead of me, where my friend Mike would bring down my resupply bag, and my wife and a couple friends would come down the next day with a pair of clean pants (and a salad)!!  I had two nights at Indian Garden campground, to rest, resupply and rehydrate/calorie up for the next half of my trip.  I was looking forward to drinking straight from a faucet, with no filtering/treating required.  I Left Monument at 8:10 sharp.  The trick to a pleasant exit from Monument is to start hiking out before the sun has hit the east wall of the canyon.  There is a steep set of switchbacks that will take you up and out, and they can be miserable if they’re in full sun.  I managed to get through them in 15 minutes, well before the sun hit and was cruising along the Tonto towards Salt Creek.

The Tonto contours along, winding through the sage and wild flowers.  Again, I meandered off the route a few times, but it was easy enough to regain it.  Cedar Spring had water flowing, very lightly, and there was a group camped there.  I was really surprised to see Salt Creek flowing, a few gallons a minute.  A Backcountry Ranger was hiking out, towards me as I was descending into Salt.  She’d spent the night there and was heading for Hermit, with a quick stop at Monument to check some wildlife monitoring equipment.  She was very interested in my turkey encounter.  After turning down her generous offer for some chocolate, we parted ways and I continued on to Horn Creek.

Horn Creek is a nice, shady spot with a lovely little stream that you can’t drink from.  It’s contaminated by radiation from the abandoned Lost Orphan Mine directly above, on the rim.  A shame, since it is a reliable water source and a really pretty spot.  It’s a designated campsite, but really it’s a “dry” camp.  Although, I’ve seen people tank up there, not knowing what was in the water.  I moved on through and found a shady spot back out on the Tonto.  I continued along, whistling the theme song to The Great Escape – it had been stuck in my head for 4 days.  It still tries to worm its’ way in there.  Not sure what to do about that… 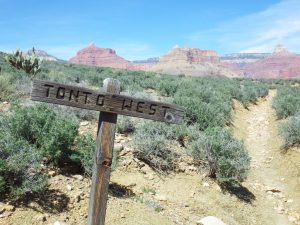 I rounded the corner into Indian Garden at 2 pm, not a bad pace if you add in my lunch stop and other quick rests.  You pass the junction for the trail out to Plateau Point, and then you start to see the cottonwood trees that fill the bottom of Garden Creek canyon.  After trudging past the herd of tourists that had walked down from the rim, taking in the array of assorted footwear (some improper), inadequate water containers and watching them try to avoid getting bit by squirrels, while feeding them, in full view of the “Do Not Feed The Squirrels” sign, I turned up the path into the campground.  I found Mike sitting at one of the campsite picnic tables, he’d arrived about an hour before.  I think he was surprised to see me.  I’d originally expected to get into IG around 4 pm.  I guess I’d moved faster than I’d thought I would.  I owe him a beer (or several).  He drove in from Kingman, hiked my 10 lb food bag down, spent the night and turned around a headed back out the next day.  His wife was planning on joining him but had to cancel, so he came alone.  Mike and Gale were the ones responsible for this whole thing – they invited me on a Grandview/New Hance trip in 2011, and with that introduction, I was hooked.  I’ve been back every year, since.

Mike didn’t just have my pre-packed food cache with him.  Gale sent chocolate, and my wife sent an orange, and some Pringles!! Yay, salt! I devoured this stuff right away.  I had packed a Hostess fruit pie in my bag – it made it down, uncrushed and full of fatty, junky, sugary goodness!  Perfect dessert after my gourmet meal of Mt House Spaghetti, herbed olives and spicy snack mix.  I stayed up past my bedtime, catching up with Mike and playing with the timer setting on my camera.  There was a huge packrat running around the perimeter of our campsite, so we made sure to lock up everything in the NPS provided rocket boxes.  The packs were hung on the steel pack rack, and after my long hike, I crashed.  Tomorrow, I would relax, do laundry, lounge and my wife would drop in for lunch (day hiking from the rim).